A friend and I were swapping family stories at work last night as we sorted mail bundles.

The story my friend told me, was about the time his Mother had asked him to deliver a bag of Swiss Chard to a friend of hers while on his way to school. She had just picked it from her garden, and had promised it to her friend, who lived along the way.

Later on, as he came home from school, he realized that he had accidentally thrown the bag into a garbage bin. He had not remembered that it was the bag that held the Swiss Chard.

When his Mother found out about it, she was of course, unhappy. She had to place an embarrassing phone call to her friend to explain that her son had accidentally thrown her swiss chard away.

“She never let me forget about it,” he said to me, rolling his eyes as he finished his story.

I quickly agreed with him. Indeed, there were many things I had done which my parents never let me forget either.

And that’s when I was struck with a thought…

As a child and even as an adult, both my parents loved to reminisce about the embarrassing moments in my life, that I tried so hard to forget.

Again and again, my misdemeanours were raised during conversations. There were many times that I had to bite my tongue, while they laughed and teased me about them.

These stories made me want to crawl under countless tables.

Now, both my parents have emanated into another dimension.

Oddly enough, in their absence, these stories have now become my friends.

Those unhappy memories that I spent my whole life trying to forget, have transformed into stories which bring me joy!

It brings me even greater joy to share them.

After we left the cafe, we met up with Sally and Kelly who were our travel-mates on the bus today. Coincidentally, we first met them on our tour bus trip to Florence. We had told them on that day that we had also booked this day trip to Tivoli.

Seeing as they had a day to spare, they came and joined us.

While Jen and I were scourging through the local shops and Frank was having a nice sit down at the cafe, they ventured off the tourist beaten path…

They told us that they had decided to be more adventurous and try to get away from the touristy area.

It paid off for them in several positive ways.

Allow me to explain…

Most of us know from experience that the further you veer from the city centre, the cheaper the prices get.
This goes for automobile gasoline, meals, souvenirs and yes, even coffee.

Where Frank, Jen and I paid three euros for each of our espresso coffees, Sally and Kelly only paid one euro for each of theirs.

Now, the second perk for them was what they had found and purchased in a store that they had encountered along the way.

This item was contained inside a plastic bag that Sally was proudly holding in one of her hands.

“We finally got us a calendar of something other than mountains,” Kelly announced to us in almost breathless gasps…

I had to stop and think for a few seconds as to why this would be of such significance to them.

As it turns out, they had told us that they lived in Banff Alberta.

Banff, Alberta known for some of the worlds loveliest vistas of mountains.

Let me repeat that to you again:

That means that they live within sight of one of the world’s best skylines.

They see it every day.

Chances are slim that I will ever see this regal mountain setting in my lifetime. Further, it’s quite understandable that they consider it’s beauty ‘old hat’ …if you’ll pardon the cliche.

And so, with the greatest glee, she showed us her new wall calendar of Tivoli. 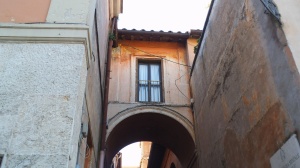 … Because she had grown tired of the beauteous Banff Mountains.

In retrospect, I’m very sure that there is an important lesson to be learned here from Sally, Kelly and their new wall calander.

I just can’t figure out what it is. 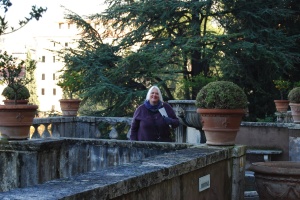 After saying goodbye to Hadrian’s Villa we boarded the bus and started the descent up the mountain road that would take us into the town of Tivoli.

When the bus could take us no further, we left the bus behind to venture through the narrow streets.

It was easy to sense what it would have been like to walk these streets six hundred years ago.

According to my sources, the Famous Gardens of Tivoli are built on Villa d’Este and were built in then1550’s for a very wealthy Cardinal Ippolito d’Este who happened to be the son of the infamous Lucretia Borgia.

When he finally realized that he would never go to Rome, he decided to being Rome to his estate. 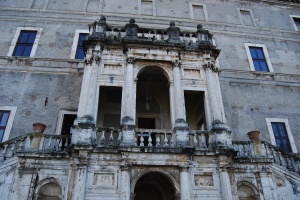 Even though eighty percent of the structures have been lost to time, the elaborate gardens he designed along with the majority of the world’s best known fountains still remain.

Of course, when we were there, there were no active fountains to behold, only quiet trails and elaborate masonry which were overgrown yet wildly beautiful.

I even found some orange and lemon trees.

They were so beautiful sitting plump and perfect in their Renaissance setting.

The Gardens are built into the side of a mountain, so there are many layers to explore. You could easily get lost depending on how much time you have to explore. 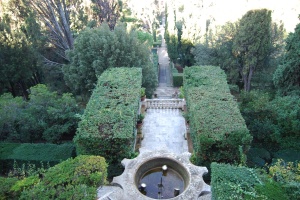 Our tour group,was given about 2 hours to explore the gardens, or we could spend that time taking a look around the town of Tivoli.

Jen poking around both inside and outside the Palace

Since Jennifer’s mobility was an issue in regards to her ankle, stair climbing had to be kept to a minimum. And so we poked around the top two palatial levels, both inside and outside the palace before deciding to leave the garden grounds and stroll the city streets.

Actually, Frank was the one who would be strolling the city streets.

Jen and I would be making a bee-line for the neighbourhood shops almost adjacent to the gardens.

Somewhere inside those shops, there were pretty little shiny baubles calling our names.

We could hear them calling out to us.

And Jen and I were determined to find them.

With my very first step into Hadrian’s villa in that early, frosty, morning air I was glad that Frank had remained adamant in regards to today’s day trip to visit Hadrian’s Villa and Tivoli Gardens.

I was so wrong in assuming that these beautful gardens flourished only in spring and summer.

While certainly they were not at their best during the colder seasons, there was an almost magical quality about both of these places. 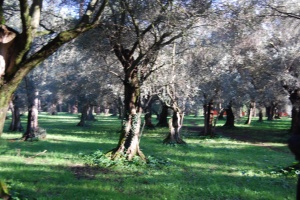 It was like coming across a fairy or an elf during their sleep. While beautiful to behold even in their slumber, how could I not be in awe of such grace and quiet beauty.

As a child, my favourite fairy tale had always been The Nine Dancing Princesses.

It is a story of nine princesses, all sisters who much to their father, the kings disdain, completely wear out their shoes in the course of only one day.

Each morning, he would find that all of his daughter’s shoes were worn and in need of replacing.

And the answer to this mystery was that each night, they would secretly escape into through an underground tunnel into a beautiful land where trees dripped with emerald jewels and golden leaves. And there, the princesses would dance the night away at a grand ball with handsome princesses in a setting so rich and beautiful, the very description of it, has not been lost on me even after all these decades.

And so, I can honestly say that for all of my life, I have wondered what it would be like to walk in a place just like where the nine dancing princesses danced their nights away.

And it was here, in Hadrian’s gardens where I began to feel for the first time, that I felt a sense that I was indeed walking on their enchanted grounds.

Now of course, reality dictates that there is no such thing as a tree being encrusted with gold leaves and dripping emerald jewels.

However, I was in fact walking among olive trees, which may not quite as exotic as in the fairly tale, but no less intoxicating to one who has never been up close to one before. 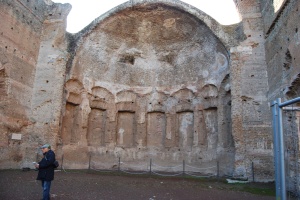 As someone who has loved olives for all her life, and buys her imported olive oil by the gallon, a close encounter is altogether a savoury experience in the real world.

Further, the architecture of Hadrian’s villa was indeed palatial. Although the remains of the buildings are only remnants of walls, pools, and the occasional set of stairs it is easy to get the sense that they indeed were once the property of an important ruler, or in this case a Roman Emporer.

I would very much like to return to Hadrian’s villa one day, but this time I would like to spend more time to explore in detail all that which a day tour on a schedule cannot allow.

Not to mention, that I would truly love the opportunity to maybe dance among the olive trees.

We were in the early planning stages of our impending trip to Italy when Frank first mentioned that he wanted to take a day trip to visit Tivoli Gardens.

“You want to go and tour a garden in Italy…

“Besides, you never visit gardens…”

The discussion didn’t end there:

“What is the point in seeing gardens in the winter when everything will be dead?” I asked him.

I envisioned barren trees and shrubs devoid of life.

It sounded so depressing.

He gave me the courtesy of thinking it over for a day.

However, in the end, he remained adamant.

Further, he not only wanted to visit Tivoli Gardens, but Emperor Hadrian’s Villa as well.

They were both featured on a half day trip.

I agreed and resigned myself to this four hour day trip. At least the whole day won’t be wasted.

Looking back now, I was never more wrong in my life.

The time we spent at Hadrien’s Villa and Tivoli Gardens were the most magical moments of our whole trip.

Once I got there…