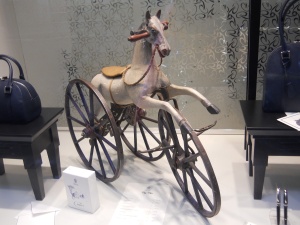 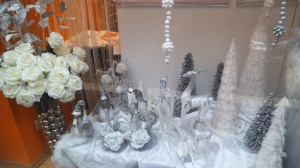 After we finished our shopping we found Frank exactly where we had left him, sipping his expresso at the same sidewalk cafe.

He was on his third cup.

“Back already?” he asked us.

“What do you mean, back already? We were gone for almost an hour,” I answered.

As it turns out, Frank was having the time of his life, sitting at a little sidewalk cafe being waited on hand and foot.

“I never had so much fun! I was just siting back and enjoying myself,” he told us as he got up to leave.

And I believe him.

Time and again since then, he has told me how much he enjoyed the atmosphere, the people watching, the excellent coffee…

….and the peace and quiet.

And here Jen and I thought he would be fretting and anxiously waiting to leave by the time we made our way back to his table.

I was never happier to have been so wrong.

And where did we go next you ask? 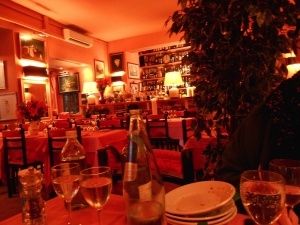 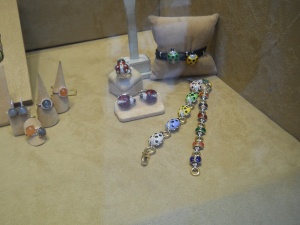 After spending about an hour treasure hunting around Campo de’ Fiori, I thought we’d better get back to Frank before he we lose him.

We had left him sitting at a cafe contentedly sipping expresso, as Jen and I went window shopping.

We had wandered off the beaten track several times as I was looking for a restaurant that had been featured in Rick Steves travel segment “Barroque After Dark.” 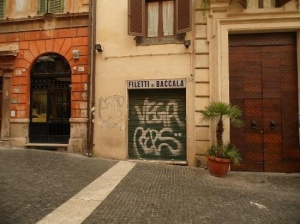 It was a restaurant that served battered cod fillets served with anchovies and a Roman house salad. Frank and I looked forward to dining there. 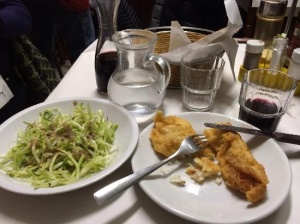 On our first visit to Campo de’ Fiori in 2008 we had gotten there way to early in the afternoon, and learned that they would not be open until the dinner hour.

Although Frank and I had found it with little problem four years ago, this time I just could not get my bearings enough to find it.

Just as well, because like before, it was probably closed and would not open till later on in the day.

As for my treasure hunting, I bought a few hair clips, and a bracelet.

Then, to our delight, we came across a store which featured what Jen and I call…

“Jesus Is With You Bracelets.”

These are attractive stretchy bracelets adorned with beads featuring Catholic Saints and icons.

We once found some at home, and enjoyed wearing them.

I sent her inside to buy one.

She came out with five.

Looking back, we really should have bought them all because they were the souvenir of choice among my friends and coworkers.

As for Jen’s treasure hunting, she scored big time when she purchased a red, hand knit, fair isle sweater for her She-Poo dog, Miss Sophie.

This of course would make her dog the most well dressed canine on our street back at home. After all, how many dogs do you know who have an authentic hand knit sweater straight from Campo de’ Fiori?

Heck, even I don’t have a single sweater from Italy.

It’s a startling reality check when you are faced with the fact that your family dog has a better wardrobe than you do. 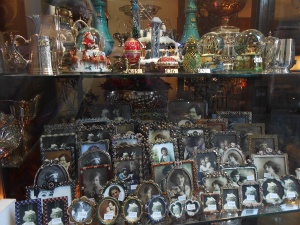 The first time I ever heard of Campo de’ Fiori was on travel guru Rick Steves segment called ‘Baroque After Dark.’

That was when I didn’t know the difference between Piazza Navona and Campo de’ Fiori.

Both lovely places however it’s usually a bit of a walk to get to either one.

When trekking through the city streets of Rome, it’s important to remember that Rome was built on seven hills. As you walk down one of these hills, you are destined to walk up the next. It is unavoidable, tiring and unfortunately most difficult on those who are elderly or physically challenged.

At long last, we arrived at Campo de’ Fiori, which according to Wikipedia is Italian for ‘Field of Flowers’. It is so named because it was a flowering field during the Middle Ages.

No sooner do we arrive in the square when Frank heads towards the closest sidewalk cafe. He sits himself down and asks us if we want an expresso.

What he doesn’t know is that by this time, Jen and I are more than ready to do some shopping. You see, while we are walking from point to point passing shop window after shop window it was difficult to grab Frank’s attention when something caught our eye and seemed to invite us into the store. Of course, to venture in without letting him know risks getting lost.

Not worth it, as I have a negative sense of direction.

I believe that’s why he tends to walk so fast. By the time he realizes that we’re trying to get his attention, we have already travelled the length of a street block, going back at this point seems mute.

Frank has thus been successful in saving a bit of money.

But he would not be so fortunate here at Campo de’ Fiori.

We could sense it. 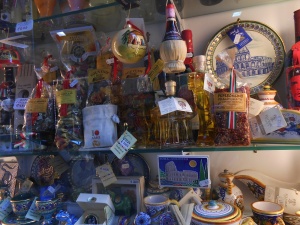 There was a piazza full of windows to admire, and potential shopping to be done.

Frank waved us away towards the shops, and told us to go look around and that he would wait for us.

Fortunately, he found a nice sunny spot that would keep him warm despite the cooler temperature. The weather seemed to be in our favour as it wasn’t raining at that particular moment.

And so, off Jen and I went…

We proceeded to walk down the length of one side of the square then turned to the next. Occasionally, we would pop into the store just for a quick look-see.

However, no matter where we went, we could feel Frank’s eyes following us.

Concerned about how much we were going to spend?

Or so we thought…

After all, we were just window shopping…

Or so he thought… 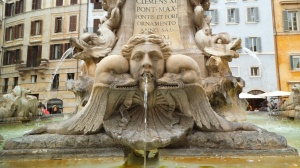 I am convinced that the concept of a piazza is totally lost on North America.

Our society would never allow for such a large plot of land in the middle of a city to be set aside solely for the enjoyment of the people.

Rather, they would build shopping malls, fast food joints or worst of all, casinos.

There is a world of difference between a Starbucks, McDonald’s and Tim Hortons, and an old world sidewalk cafe. 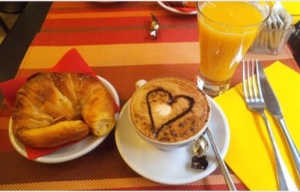 A friend at work once asked me…

“Is there really such a thing as a sidewalk cafe where you can sit all day in the sun drinking expresso complete with accordion players and all?”

I could almost see the tears welling up in his eyes that the thought of this most pleasant of visions could actually be in fact a reality.

I almost wanted to say…

“Yes Virginia, there is such a place where people gather day and night to enjoy the company of family and friends in an outdoor social setting. There, you can indulge in coffee, tiramisu, authentic pizza Margherita, among other world class delicacies.

These meeting places complete with beautiful fountains can only be reached on foot as motorized vehicles are not allowed as they detract from the simplicity of the setting.”

These places are known as piazzas.

If you want to gain some sense of what a piazza is like, imagine a a rectangular square the size of four football fields. This is the gathering ground for people who seek to escape all the noise, the traffic, and the rat race of their working day.

People bring their dogs here. People play their musical instruments and even sing here. There are original fountains and statues dating back to the renaissance along with the obligatory pigeons. People can make their living here by simply selling fruits, vegetables and flowers here.

Hanging out at the shopping malls is unheard of when there are outdoor piazzas to enjoy.

And why would we be hard pressed to find these same piazzas in North America?

They would no doubt be considered as…

In closing, I think I’ll end with a silly bit of verse that stems from from a song sung by Andie MacDowell’s character the movie ‘Michael’ starring John Travolta: 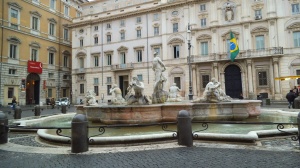 While touring the Vatican, our tour guide told us that the Pope has a weekly audience each Sunday morning in St. Peter’s Square at 9:30 a.m. He does this from his apartment window.

Frank and I knocked around the idea about paying him a visit, and then finally decided…

The overcast skies sporadically drizzled down on us as we watched the church going people neatly file into the St. Peter’s Basilica for Sunday morning mass.

Eventually, Jen got her knitting out and proceeded to put this waiting time to good use.

Both Frank and I contented ourselves with people watching.

A group of policemen had gathered, and I mustered up the courage to approach them to ask what time the Pope will be making his weekly address.

That was still two hours away.

We decided that another two hour wait in the damp cold weather would not be in our best interest, and Frank then decided that a visit to Campo de’ Fiori was in order.

And so, off we went…

Frank led the way while Jen and I fell in line behind him like obedient little ducklings.

Later on that day, I was able to FaceTime my Mother when she told me that she had watched Pope Benedict give his weekly audience on the evening news.

She told me that she was not able to spot us among the listening throngs of people.

It was then that I told her that the Pope had missed his chance to see us in St. Peter’s Square.

He totally blew it!