She was grandmotherly both in nature and appearance and was always neatly dressed in a sweater and skirt. She wore gold rimmed glasses and spoke with a British accent.

Mrs. Carter introduced me the concept that reading could be fun. She was also the first person that I can remember who ever read to me.

Looking back, it’s been hard to for me to remember the first book that she read to us. If I had to make a guess, I’d say the book was THE MOUSE THAT ROARED.

We all enjoyed listening to her lovely British cadence. I was struck by the confident manner she showed to us as she read. She seemed to actually enjoy reading aloud in front of others.

I wondered if I would ever be able to read a story to someone else.

My first introductions to reading aloud in front of others was in school and always tinged in awkwardness and embarrassment, I’m sure we all remember that uncomfortable feeling.

When I was six years old, my Father would make me read him a story from my German book of Grimm fairy tales. Then, the purpose of reading was all about practising my German and had little to do with sharing joy.

The first books that I remember reading in their entirety on my own were the TRIXIE BELDEN mystery series when I was nine years old. After that I read CHERRY AMES, STUDENT NURSE and then the NANCY DREW mysteries. I was twelve years old by the time I finished them.

As my children were growing up I tried to make it a point to read to my daughters from time to time. I read them the CHRONICALS OF NARNIA and the HARRY POTTER series. My impression of Hagrid was very well received.

Then there was the time that I was reading a particularly touching Christmas novel THE TIMEPIECE by Richard Paul Evans to my youngest daughter. While I was overcome with teary emotion, my daughter handed me one tissue after another as I wept inconsolably while reading the final chapter.

Indeed, the joy of sharing a book with someone else can be a very good thing. 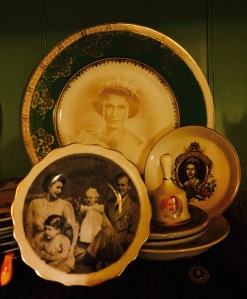 My Grandmother was very keen on the British Royal Family.

Further, I’ve got the Royal memorabilia to prove it.

There’s a plate from the 1953 commemorating Queen Elizabeth’s coronation. Then, I have a set of Charles and Diana wedding mugs. There’s a ceramic thimble and a porcelain bell, both bearing portraits of Prince William when he was a baby. Also, there is a cache of ceramic plates of Queen Elizabeth with her family, on Royal tours, and significant anniversaries. Let us not forget the copper dish from Canada’s centennial celebrations, bearing the image of Queen Elizabeth.

That’s just the stuff that I can remember.

Whenever the Royals were being featured on television, Grandmother would turned it into a family event complete with coffee, tea, and platefuls of cookies and cakes. These would be served with coordinating luncheon napkins.

The two Royal events that I remember celebrating with her the most was the wedding of Charles and Diana in 1981, and when Prince Charles became Prince Of Wales, way back in 1969.

Yes, she was quite the Royal watcher.

However, I never quite realized the extent of her fascination until one day when my Mother told me the following story:

About ten years back, my Grandmother had a bad fall which landed her in Toronto’s Sunnybrook hospital. My Mother came up from Vermont to be by her side.

It took several days before the hospital could find her a room. When they finally did, my Mother was there as nurses asked my Grandmother the following questions for the admitting forms…

“Do you have any allergies?”

“Have you been admitted to a hospital in the past twelve months?”

“What is your height?”

Immediately after giving this reply, my Grandmother threw up her arms in self rebuke, while letting out a small cry of frustration.

“No, no, no….” she said to the nurses as she began to correct herself.

“Sorry, I was wrong. That’s not my height,” my Grandmother apologized.