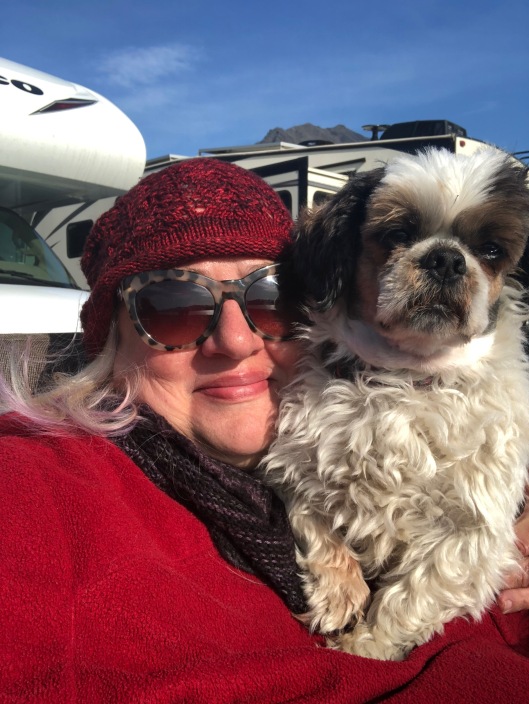 As I emptied my Mother’s closet after her death five years ago, in the back I discovered a thick and hearty maroon housecoat that I had never seen before. It was big, beautiful and new. The tag on the back said L.L. BEAN.

The only reason I can think of it being in the back of the closet and unused was that she was more often hot than cold in the four years that she lived in her little apartment after her beloved Jim’s death.

Indeed, I remember many conversations with her as she described the attempts by the apartment buildings’s management insisting that she remove the air conditioner from her apartment window during the winter months or she would be subject to heavy fines and penalties.

I had visited her during winter and cold spring months in Vermont and found her apartment to be always toasty and warm even without the heat being turned on.

She never had the heat turned on.

To this day, I still cannot figure out why her second story apartment never got cold.

I never saw her wearing the red housecoat.

And so, fast forward five years to this past May when it came time for us to leave on our Alaskan adventure.

When it came to deciding what clothing I would take along with me on the trip, Mother’s red housecoat was an obvious choice.

The only downside was the housecoat’s bulk.

It would easily take up a quarter of the camper’s bedroom storage closet unless tightly rolled up. Secondly, I knew for a fact that it would take up half of any industrial sized washing machine. There was no chance of it fitting into my small portable washing machine which I had purchased on Amazon for $150.00 and fit snugly into the camper’s shower stall for storage.

In spite of all that, I am so glad that I brought it with me.

I found a place for it on a hook in the bathroom next to the door.

During our trip, there were many chilly days when I never took the housecoat off even during midday when I was fully dressed.

Even my husband gladly wore it it while having his 6:00 a.m. coffee outside amid the glaciers and 50 degree temperatures while I continued sleeping snugly in my warm bed as the furnace ran without end.

The photo you see posted above is me wearing the housecoat in Seward, Alaska as I sat at the foot of glaciers drinking my morning coffee and watercolour painting.

It was warmer than any coat or sweater I had brought along.

Bobby-Dog fit easily the coat when cold winds started coming in, or during a sudden or unexpected drop in temperature.

It was also very useful during evening campfires along the way because not only was it warm, it was an excellent armour against mosquitoes who tormented me to no end.

Now, three months later during the last days of the trip the housecoat looks tired and could certainly use a wash. Even so, it still easily passes the “sniff test’ and will be used until the last day.

It has suffered no holes, broken seams, not even a single fray, and the zipper works like the first day I tried it on.

So this is the part where I give credit where credit is due.

Kudos to L.L. Bean for making such an excellent housecoat.

Also, thank you Mother for purchasing it in the first place, even though you never used it once.

It’s almost like she knew along that I would need it some day.

It’s a gift to know that she can still bring me joy. 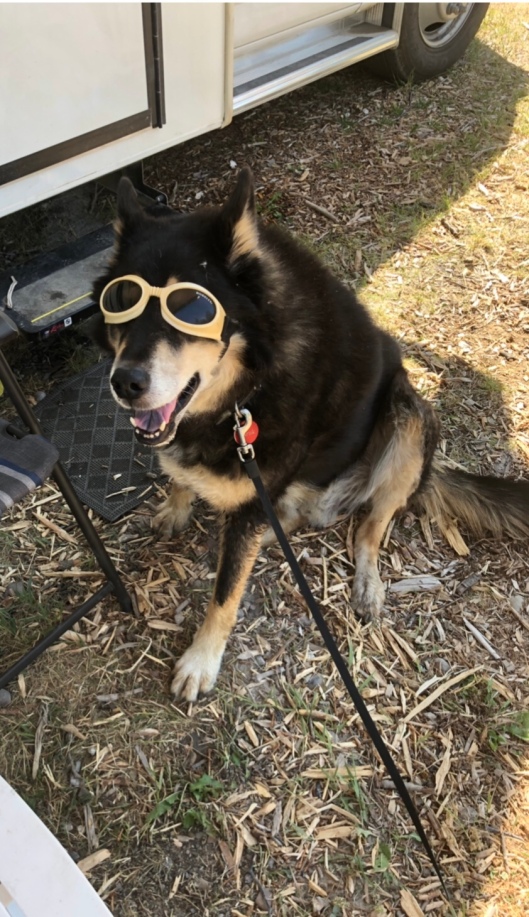 It was love at first sight on July 2 at the Fox Run campground when I saw him slowly walking up the hill from the lake. He had a tired swagger that lent itself unto the heat of the day.

We were currently camping for six nights in Palmer Alaska.

Here, we were hunkered down for the American July 4 holiday in an effort to avoid the heavy traffic and packed scenic sites. We considered ourselves lucky to have found a vacancy where everywhere else had been thoroughly booked for months in advance.

Normal temperatures here reach the low 70’s, and we were in the throes of a 90 degree heatwave.

I’m told that because of the year round cool weather houses do not come with air conditioning as it never gets hot. The sad news of the day around the camp was that all of the local Walmart’s fans had been sold out.

I had been sitting outside our camper practising my watercolour painting under the shade of our awning when I saw him out of the corner of my truck ye.

The more I watched him, the more enamoured I became. There was something different about him. Maybe it was the goggles. You just didn’t see dogs wearing bright yellow goggles every day.

“Nice dog,” I called out to the dog’s owner walking beside him.

Getting up from the table we began to approach each other.

When I patted the dog’s neck I found his fur soft and well cared for. The moment I began to scratch behind his ear he laid himself down on the cool grass.

“This is Maruk, the owner told me, “and he loves the ladies.”

(Pronounced Ma-Rook as in “spook”)

Maruk, Al told me, was born somewhere in the mountains of their home state where the high altitude and thin air led to Maruk’s genetic disorder. Exposure to sunlight caused irreparable damage to the eyes.

Maruk was a feral young pup when Al found him. Al told me that he knew this because no young domesticated pup would be able to hunt and scavenge for food the way Maruk could.

Al went on to explain that they had become friends ten years ago when he first found him running wild in the Colorado mountains. That was when Al decided to take him under his permanent care. A series of veterinarian visits led to the diagnosis of Maruk’s eye condition, a type of autoimmune disorder. Maruk has been wearing his googles every time they go outside since.

“Maruk loves everybody,” Al said with a smile, “and that includes other dogs.”

“If a dog snaps at Maruk, he’ll just lie down where he is and patiently wait until the other dog gives up.”

That was exactly what happened when we brought our own Bobby-Dog, a shitzu, over to meet him. The moment Bobby got his fur up, Maruk layed himself down in the grass again with what seemed to be a heavy sigh.

Unfortunately, not long afterward, Maruk and I had to part ways when Al explained that Maruk would not be able to withstand the heat for much longer, again basically because his constitution was more designed for much cooler temperatures at a higher and less pressurized atmosphere.

I watched Al and Maruk recede into the forest behind us as they returned to their campsite. A feeling of sadness came over me knowing that I probably would never see them again.

On the morning that we left the campground we drove past Al and Maruk’s trailer.

It was easy for me to imagine Maruk laying comfortably within the cool darkness of their rig.

This parting thought left me happy for Maruk.

Silently, I wished them both a long and happy life.