It didn’t take long for Jen and I to hone in on to the first souvenir shop we could find. Before we knew it we were rummaging around the trinkets while comparing cost and colour.

Several stores later, both our hands were full of bags containing trinket treasure and souvenir booty. 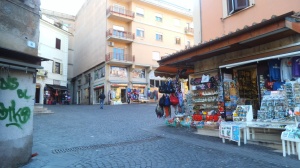 We both decided that this would now be a good time to try and locate Frank.

As it turns out, Frank found us.

He had only gotten as far as fifty feet of the entrance gate of Ville d’Este when he found an indoor/outdoor cafe. 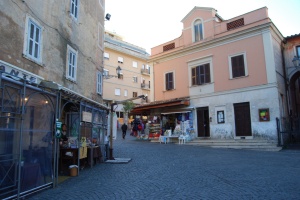 The Cafe is on the left. We sat just behind the netting

As we sat down at the table we found him working on his second expresso.

Jen and I followed suit and ordered two for ourselves.

Imagine our delight when the waiter brought us a plate of complimentary cookies.

We practically inhaled them.

When we went to pay for our expressos at the cashier, we found that the cafe was selling Christmas Panettone, baked in the local convents.

I couldn’t hand over my money fast enough.

The thought of tucking into an fresh authentic Italian Panettone baked at a convent was too irresistible for me to bear and worth every penny of the seven euros that it cost.

While my husband and I were dating he lived in Thorold, Ontario otherwise known as “Little Italy”.

Many times I had been in the store at Easter and Christmas time when their shelves were just brimming with beautiful and brightly wrapped packages but I just couldn’t figure out what it was.

A ‘Kinder’ chocolate with a toy surprise hidden inside…

(they were so big, it could have held a stuffed animal)

When I finally asked, I was told it was a cake.

That made me a little leery.

A cake all the way from Italy and now sitting on the shelves here in Canada could not be all that fresh.

And so, I had resolved that alas…

I would never be able to try one for myself.

After getting back to our hotel room we opened it, and enjoyed our fill. Jen and I indulged in each individually ripped off piece of citrusy bread-like cake by popping the fluffy morsels into our mouths one piece after another.

And life was good.

1 thought on “Adventures In Italy… Post 70: The Perfect Panettone”