At last came the opportunity to sit down someplace warm and dry and enjoy a luncheon courtesy of our host, Appian Tour Lines.

The atmosphere, service and food were wonderful as well as the company and the atmosphere.

It really is quite remarkable how fate can throw a dozen people together at a table for two hours to chat and compare lives, only to separate at days end never to see one another ever again.

After our meal, we were obliged to visit a leather shop the size of a department store filled with purses, belts, wallets, bracelets, book covers and so on and so forth.

Jen and I indulged in some bracelets that looked phenomenal and were quite reasonable priced. The purses however were way beyond my price range.

For the last two hours of our tour we were given free time to do as we pleased.

This proved to be a little awkward for Frank, Jen and myself as once again, we felt strangers in a strange land, in the rain, with the temperature dropping as the sun began to set.

The group was told by the tour guide to meet at a predesignated spot at 4:00 p.m.

And so, Frank, Jen and myself parked ourselves in front of Florence’s city hall on The Palazzo Vecchio, which was built at the start of the 14th century as the Palazzo del Popolo, or Palace of the People.

The doors of the city hall were locked, which we found quite curious as it was a weekday, and still during business hours. We were told that there were wondrous works of art within, but we were unable to gain access to the building. It looked curiously locked up tight. When we asked why it was closed, no one seemed to have any answers.

Nevertheless, the front of the city hall did provide some shelter from the rain.

Lucky for us, it was market day at the Palace Vecchio.

And so, Jen and I left Frank on the steps of the city hall to do a little marketing ourselves.

There was a great deal of variety to be seen in the market stalls. There were crafts from all over Europe and they looked quite genuine as well.

Jen purchased a cinnamon-sugar puff pastry which she still raves about to this day.

I purchased nothing except a scarf from a woman walking the streets. I was afraid it may have been the only income she made all day. The scarf was made of a velvety brocade of red and black. It was very lovely indeed.

It was almost 5:00 p.m. before we were able to board the bus that would take us back to Rome.

I was looking forward to the drive back in the heated bus where I could quietly take in all that I had experienced in the past twelve hours.

One thing was for certain…

I had fallen in love with Florence and I wanted to come back to it again one day. 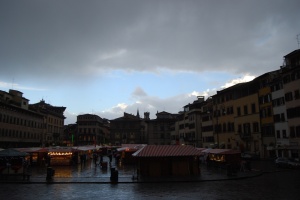