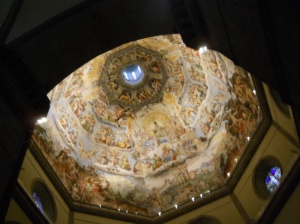 After leaving the museum we were finally led to the heart of Florence, the Duomo, formally known as The Basilica di Santa Maria del Fiore.

Construction began in 1296 and lasted until 1887 when the final touches were put on the exterior.

It is as ornate as it is large.

There are no words that can adequately describe this vision of grandeur.

And we were viewing it from under our umbrellas as the rain continued to pour down upon us in buckets. 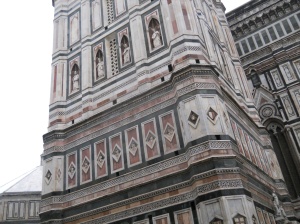 Once inside, we were led to the front of the church.

My wet shoes squeaked and squawked with every step.

By the time we reached the front of the church my shoes were dry. That should give you a good approximation of how far we had to walk. 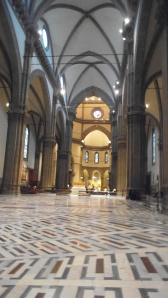 And then finally we found ourselves under the Duomo looking up at the miraculous.

We were all struck speechless as we stared.

Only after a few minutes did all the picture taking begin.

It was announced that due to the inclement weather, the stairway leading up to the dome was closed.

This did not come as a surprise. 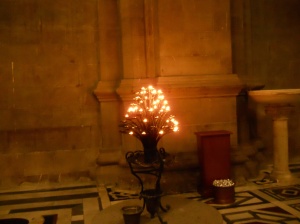 Had it been a better day weather wise, I would have made the climb. The view would be worth the effort.

I guess I’ll just have to go back and revisit it one day! 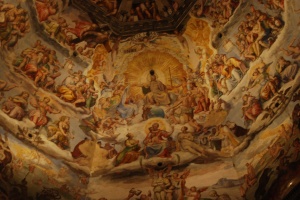 2 thoughts on “Adventures In Italy… Post 62: Inside The Duomo”