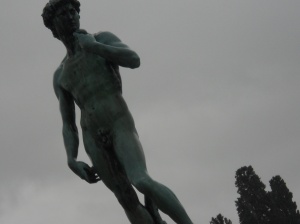 There are times when one realizes that they’re at the threshold of an epoch in their life.

And hopefully, when this happens, they have the presence of mind to realize it.

But they do indeed happen.

And you forget to breathe.

That’s more or less what happened when I finally met David….

Mind you, I had to prepare myself in advance.

It isn’t every day that one comes face to face with an iconic piece of art.

And let me tell you, I haven’t met all that many which made this particular meeting rather spectacular.

We found him at home in the Academia Galleria, a museum in Florence.

And there he was….

Larger than life, perfect and glorious.

I hung around the back of the crowd as the tour guide made his introduction of David to our tour group.

Please understand, that by this time, Frank, Jen and I had seen several replicas of David.

Most statues were found outdoors, looking miserable from being continually assaulted by the local pigeons.

And so, when I finally found myself up close and personal with Michelangelo’s David…

I had to ask several times ….

“Are you sure this is the REAL David?”

And the heartbeat of all things rennaisance.

The tour guide assured that yes, this was the real David sculpted by Michelangelo.

And so, what does one say when meeting the iconic statue of David?

Not much, because of course…

…it’s only a statue.

But if I had to say a few words I would have been too awestruck.

Instead, I allowed myself to walk around the statue several times before taking a seat on the benches conveniently placed behind David….

What else does one do when sitting directly behind the statue of David?

At some point when the tour guide was explaining to us the glory of David, he mentioned how several years ago a man took a sledge hammer to the statue and although he did no major damage, the impact of the sledgehammer did leave a scar.

To be honest, I was hard pressed to find any telling mark of the vandalism.

Which led me to notice that something seemed wonderfully out of place, but I could not put my finger on whatever was tickling me from the inside of my brain.

It took longer than it should have for me to figure it out.

Having already spent over a week in the eternal city, Jen, Frank, and I had been caught up in all that is Rome, namely the ruins.

That’s when it hit me…

David was in remarkable shape in spite of his advanced years…

And to think that this was the very piece of marble that Michelangelo had crafted into a sculpture that could possibly out endure another 500 and possibly even one thousand years.

And here I was feeling quite underdressed in a baggy black hoodie, casual black slacks while peering up at David from under a wooly cowl.

I believe it was at this point, when I finally figured out what I would say to David, if he were the listening type:

First of all, I am so grateful for this opportunity to see you with my own eyes.

You are more beautiful than I ever imagined.

Secondly, I’m so glad that you’re not stuck outside in all the rain and covered in pigeon poo.”

I was obviously so overcome,

…that I found myself bereft of all reason.