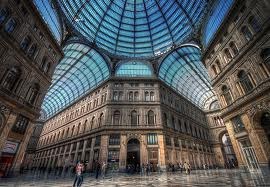 It was a lovely September day in 2008 when Frank and I visited Naples for the first time.

We had a chance to stop for a lovely photo-shoot at the Naples harbour with the Isle of Capri gleaming in the distance.

Once we were back on the bus, our tour guide announced each Bernini Fountain as we passed by them by… one after the other.

Traffic was so congested that day that the bus could not stop for the scheduled outing at the Umberto Galleria mall.

But lucky for us that the stormy weather on our second visit now made this possible.

But I wouldn’t dare test your patience.

The gods are obviously not amused by our presence here. Either that, or they are testing our touristy little hearts to see if our travelling band is worthy of Mount Vesuvius.

Only yesterday we spent 20 euros on two umbrellas on our way to the Vatican from Castel St. Angelo that we had to forfeit as you know.

We were asked to check the umbrellas as they posed a threat to the Vatican treasures and were told we could have them a back after the tour if we walked around the entire circumference of the Vatican to get back to where we started.

Needless to say, that did not happen.

However, Frank did eventually break down as we arrived at the doorsteps of she shopping mall. He bought three more umbrellas for 15 euros, at 5 euros each.

It was too,late however, we were all soaking wet.

The tour guide promised us a shopping mall.

What we got was the grandest steampunk galleria shopping emporium the likes I have never seen before.

Everything glinted and gleamed. The glass ceiling itself was worthy of a grand ballroom so that you could dance underneath the stars.

Even the floors included mosaic murals.

It was so beautiful that I didn’t want to leave…

Shopping at the local malls after we get back home will never be the same again.