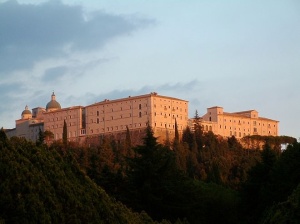 I remembered Monte Cassino well from our previous trip.

The sight of it was a surprise to Frank, and a moving one at that.

Pointing to what looked like very large white fortresslike structure high atop a neighbouring mountain he explained that Monte Cassino is where during the Second World War, allied forces stormed the Germans.

Yes, I could recall seeing a movie about that many years ago.
Being married to Frank, watching World War Two movies was obligatory, not an option.

They televised a lot of war movies in the old days, when there was only television and no VCRS, DVDS or downloading. You were stuck with whatever movies the television stations decided to run, and war movies were very popular.

However, war movies were never my forte….

Now, Monte Cassino is a peaceful looking monastery with no sign of it’s violent past.

After spending a few minutes contemplating Monte Cassino’s past, my daughter and I turned our thoughts to visiting the obligatory gift store alongside the rest stop.

Among the expected wares being offered for sale were liquors, candies, scarves, pasta, sauces, honey, jewelry along with an overkill of Ferrari memorabilia.

Finding the prices high, we purchased little if anything at all….

Then it was back aboard the bus.