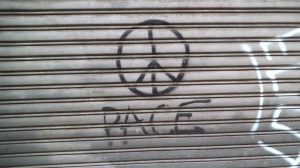 Fortunately for us, in spite of the inclement weather there were two major facts that were in our favour today. And this was that we had been on this precise tour before on our first journey to Italy four years ago.

First, we had none of the anxiety over where we were to meet the tour guide, or what would be in store for us in regards to what we could expect from the tour.

Second, we would not have to worry about the heat that we experienced during that hot September day. Temperatures reached ninety two degrees, which may be tolerable if you are in the shade with a cool drink. However, it’s a different story when you are climbing one of the seven hills of Rome, and a steep one at that just so that you can overlook the temple of the vestal virgins.

We knew that we would be meeting our tour guide in front of the subway station located directly across the street from the coliseum.

We had arrived a little early, however the rain arrived right along with us.

The choice was simple: wait outside in the rain, or go inside the subway station and hope that we will somehow, someway cross paths with the tour guide.

Now, there has been a slight unfortunate snag to our journey, which I have yet to explain.

In early September, daughter Jen had a most unfortunate ate tumble down a flight of stairs in her apartment building. This fall down the stairs left at least two ligaments torn, and a possible fracture which was difficult to see in the X-rays because of the major swelling.

Her ankle was black, blue and red. I have never seen anything like it, and I hope to never again.

She did all the right things to prepare herself for the journey, did physio etc, however, her ankle had barely begun to heal by the time our departure date had rolled around. She did bring her air cast with her, but tried to wing it. As far as I’m concerned, she was incredibly stoic, if even to a fault.

Now, just in case you weren’t aware of this, I will now point this out in no uncertain terms:

If you are to meet up with someone there, you must be on your guard, because you can easily miss them in a heartbeat.

It was then that I could hear Frank question himself out loud:

“Were we suppose to meet the tour guide on this level or the upper level?”

A little grey cloud formed over my head to match the ones outside.

Joy, I thought to myself.

I volunteered to stake out the upper level entrance.

Frank was in his comfort zone here, and there were two long flights of stairs to climb, which excluded Jen from the equation.

Within a few minutes, I had found a nice tree to stand under while the heavens seemed to let loose and hold nothing back. Even birds were beginning to stand alongside of me.

People came, people went, but no sign of the tour guide, or anyone else who might seem to be looking for their tour guide.

Ten minutes later, Jen and Frank arrived, and we continued to stand there together looking up one way and down the other.

Eventually, we noticed a couple standing not too far away, as if waiting for someone as well.

They eventually came close enough so that we could comfortably ask them if they were waiting for a tour guide as well.

At about that very time, a small car pulled up, and out emerged two young looking chaps. The moment they opened their umbrellas, we knew that we had found our tour guides.

The tour company we had chosen, the same as the last time we had visited Italy was called Angel Tours.

And of course, if you want to be recognized by your customers, what better way to attract their attention, than by carrying umbrellas adorned with angels.

Our tour was about to begin… 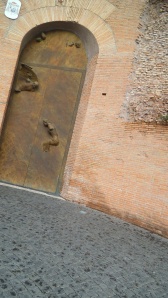 This this is the most enigmatic door that I have ever seen. Take a close look.