So… Maybe your wondering that if you ever do have the chance to travel to Europe, how does one begin planning?

I know that this is a good question, because that’s exactly what Frank and I asked ourselves, as we pondered the possibilities of going to Rome.

We found the answers in a television travel series hosted by travel guru, Rick Steves.

His television shows were on Sunday mornings, and several episodes were shown in consecutive order. After I had seen about a month’s worth, I decided to buy the whole DVD series when I happened to see it on the shelves of a Costco store while shopping one day.

The DVD set was well worth the forty dollars.

There were two specific episodes exclusively featuring the city of Rome.

We watched them over and over, and realized that we wanted to model our visit to Rome just like these episodes did.

Rick Steves also provided us with tips on how to avoid long line ups, like how to go about purchasing your tickets in advance. This advice made an enormous difference as we did indeed save hours, especially at the Colosseum.

Were it not for his expertise, I would never have known that a ‘Nasone’ was a drinking water fountain, with fresh water being transported via Rome’s ancient aqueducts for all who thirst, at no charge. Just bring water bottles.

All in all, we brazenly stole many ideas from Rick Steves and made them our own.

They made for two fantastic holidays, and with any luck, the possibility of a third trip as well.

Both Frank and I are grateful! 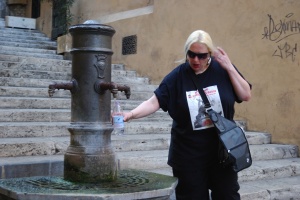 Pictures above are of a ‘Nasone’ (for nose.) There are small holes on the nasone for you cover up with a finger so that the water to well up for you to drink from.

2 thoughts on “Adventures In Italy… Post 13: Trip Planning Made Easy”