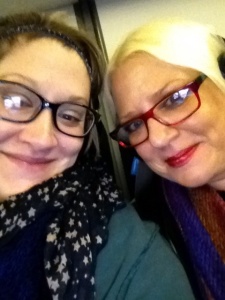 At last, we had finally taken off from Heathrow Airport and were heading towards our final destination… Rome!

However, our botched plane connection had made us fear for our luggage.

Further, we had no way to advise the limo company that we would be four hours late.

This trip had started out like a slapstick comedy, the kind you love to hate.

All of us were a hot mess as we took our seats on the plane.

The two hour flight to Rome gave us a chance to rest and turn our thoughts to our impending adventures.

Before we knew it, we had safely landed.

As we entered the airport, we were led to customs where  our pretty Canadian passports were stamped.

We were now officially in Rome, Italy.

But our struggles weren’t over yet…

After waiting twenty minutes at the luggage carousel, I was beginning to fear the worst.

Little did I know that in a few moments it would be all over.

That’s when the unthinkable began to happen:

Everything began falling into place…

On top of that, we found our limo driver bearing our name within sixty seconds of walking through the sliding doors that opened into the Leonardo da Vinci-Fiumincino Airport main concourse.

After we all breathed a quick collective sigh of relief, we were literally running with our nine pieces of luggage into the street as we made a mad dash for the waiting limo.

Within three minutes, we we safely tucked into the car, with all the baggage accounted for and stowed into the trunk.

The limo driver turned out to be a very friendly man who was prone to chatting, which we found delightful. He was the first friend that we had made on our trip.

As it turns out, he was the first of many.