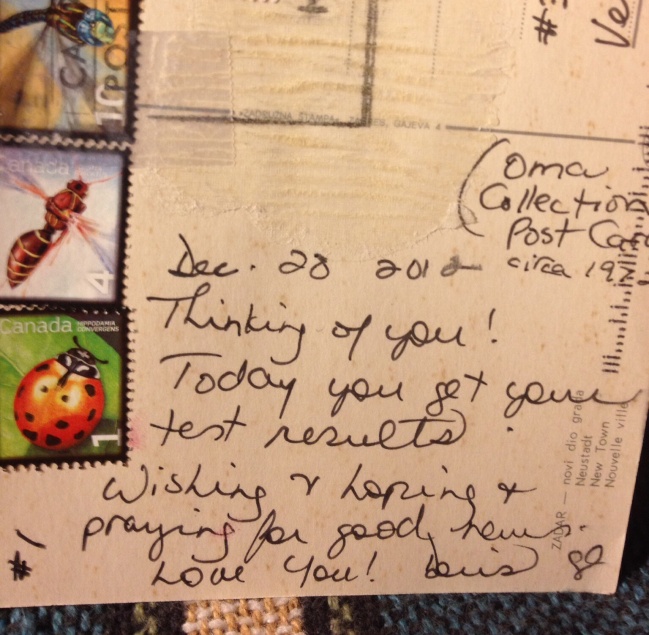 If I remember correctly, it was late December 2012 when we got Mother’s cancer diagnosed.

I was worried about her living alone with no one to talk to, to vent with, to tell her that everything is going to be alright.

Don’t get me wrong, she loved her independence, but I could not imagine her sitting in the living room night after night alone with her thoughts.

Maybe it was just that I wanted to be there for her. To hold her hand, to tell her that I love her and that we’ll get through this somehow.

It was then that somehow, I remembered my Grandmother’s postcards.

Then I thought of the lesson she taught me that I had never forgotten:

“Everyone deserves to get a letter from time to time. Letters bring memories of friendship and happiness.”

What if I were to send Mother a postcard every day?

What a fantastic little pick me up that would be for Mother.

And to make this even better, I would be sending the postcards from her own mother’s collection.

Further, I had hoped that it would give Mother incentive to get out of the apartment at least once a day to pick up her mail… perhaps even talk to her neighbours.

And to top that off even more, somewhere in the future, hopefully distant future, I would eventually get the cards that I sent her back.

Except for one thing.

Postage to the United States is one dollar and $1.10 per postcard.

Sending her a postcard today it’s going to get pretty expensive.

And it was just about then that I remembered…

I’ve got a stamp collection.