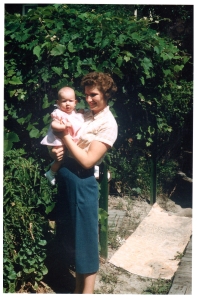 I remember one day as a child playfully running when I accidentally fell.

The glass jar I was carrying smashed onto the sidewalk, along with me, breaking into a multitude of sharp jagged pieces.

As I landed my inner arm was badly sliced.

I still have the scar.

Seeing the blood running down my arm, the adults were naturally horrified and asked what had happened.

I lied, being embarrassed over such a silly mishap…

(After all, like scissors, one should never run while carrying glass jars…)

I wished to confer my irresponsibility onto someone else, and told everyone that my playmate had pushed me.

It seemed the easiest thing to do.

The next day, after my playmate insisted that she had not pushed me, my Mother realized that I had wrongly accused her for something that had been my own fault.

Naturally, my Mother was not going to stand for my bad behaviour.

I was ordered to go to the family of the wronged playmate, confess that I had lied, and then apologized for the grief that I had caused.

It was my first lesson in accountability, and one that I never forgot.

I was four years old.

Today’s news is filled with similar stories. However, today’s liars are not five year old children but rather grown adults. I can’t help but wonder if they were ever held fearfully accountable by their parents for their wrongdoings.

Maybe if they had a Mother like mine, the news today would not be so grim.

No… can honestly say, that neither one of my parents would not have put up with any of these modern day liars and cheats when they were getting away with their ongoing childhood cover ups…

And neither would have yours.