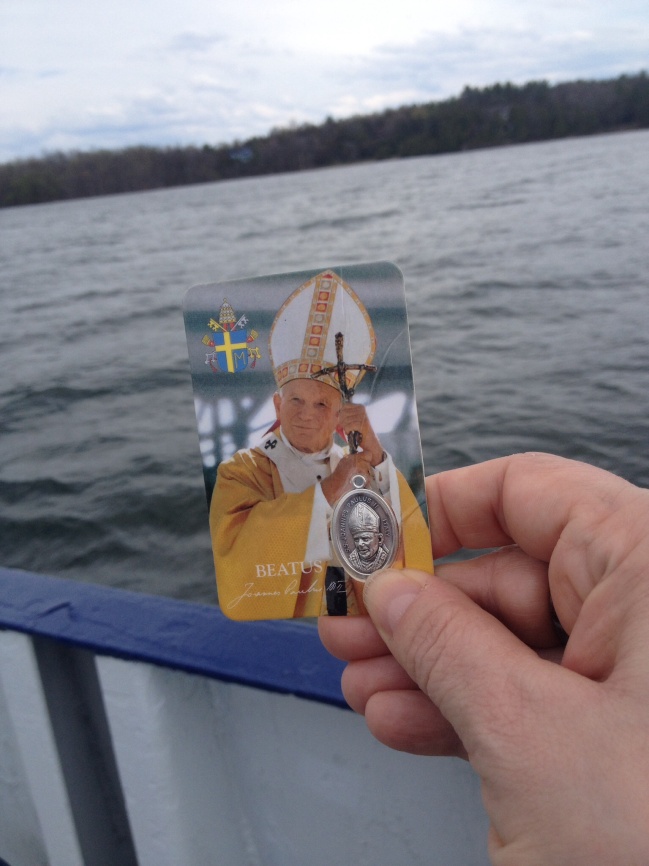 My Mother’s Father, my Grandfather was a Baptist minister.

The entire family was therefor Baptist.

As a young girl living in Toronto, the only thing I knew about Catholicism was that all of my Catholic school mates got a lot of extra days off from school because of the staggering number of Catholic holidays there are in a year.

After that, I never gave the Catholic faith much thought until I was required to attend various Catholic funerals. I found many of the rituals comforting and faith affirming.

During my Father’s final days back in January 2005 someone had hung a rosary on his IV pole.

Seeing it beside my Father’s bed was to me a source of unexpected comfort.

And then there were my visits to Rome Italy…

Now, one does not visit Rome without visiting the Vatican along with all the other Roman Catholic churches which can be found on virtually every street throughout the city.

I was unexpectedly struck with awe at their beauty, history and art.

Dear and gentle reader, please understand that although I could never convert to the Catholic faith I have developed a great deal of respect for it.

Now, there is a little bookstore in St. Peter’s Square where my daughter and I purchased some rosaries, books, postcards, bracelets and necklaces with iconic images and beads representing past and present Popes. My daughter also bought a little credit card sized souvenir bearing a picture of Pope John Paul. A small silver charm was embedded inside the plastic.

We eventually began to refer to this endearing little memento as…

Before leaving for work for my first shift after Mother had been admitted into the Respite House, my daughter slipped ‘Pocket Pope’ into my jacket pocket.

“It will help you feel better,” she told me as she knew I was so worried about Mother that I was continually overcome with sudden bouts of nausea.

And you know what?

Just knowing that I had ‘Pocket Pope’ with me as a talisman of sorts gave me a small boost. Yes, I must admit that it had an unexpected positive effect on me.

And so, when I received the call to come to Vermont I put it in my pocket as a source of strength, albeit small and perhaps even a little silly.

The last hour of the trip involved a ferry ride that took you from Essex in New York State to Charlotte, Vermont.

Being the middle of May, the weather was nice enough to get out of the car to stand alongside the ferry’s rail and take in the breeze while crossing Lake Champlain.

Even while taking in the beauty of Lake Champlain and the mountains of Vermont, I realized that I still felt emotionally grim over the purpose of our journey.

It was then that I reached into my jacket and pulled out the ‘Pocket Pope’.

I could not help but smile.

Days later, while sitting at Mother’s bedside it occurred to me that I should have brought a rosary from home. Not so much for the religious value, but I knew that to see one hanging from her IV pole would be a small source of comfort, just like it had been in January 2005 when I saw it at my Father’s bedside.

It was then that I again retrieved the ‘Pocket Pope’ and laid it on the edge of Mother’s pillow as she slept.

“There…” I thought to myself as I took sleeping Mother’s hand into my own while easing back into my chair,